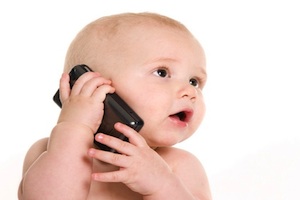 SPROUTS, DELAWARE – According to at least one eyewitness report, a baby called the home of his great grandmother yesterday morning using only a calculator. The baby, eleven-month-old Sebastian Humphrey, reportedly mumbled with great conviction throughout the 25 minute call. Most remarkably, however, is that Sebastian’s great grandmother answered the call using a television remote control.

“I was trying to pay bills when Sebastian took the calculator from me and ran away with it next to his ear,” said Sebastian’s mother. “About 30 minutes later, shortly after Sebastian finally gave me my calculator back, I get a call from Gram Gram telling me she just had the most pleasant conversation with Sebastion. I couldn’t believe it, but Sebastian shook his head yes when I asked him if he had been talking to Gram Gram.”

“I’m so proud of my great grandbaby,” said Gram Gram, Sebastian’s Great Gram Gram. “I’ve been bragging about the call to my pinochle group ever since.”

Only one eyewitness could verify Sebastian’s miracle call, but it remains unclear what kind of witnesses there could be other than eye-witnesses. Critics suggest the call could all be a matter of coincidence.

“I think they both think they were talking to each other and there’s no point in arguing with them,” said Sebastian’s father. “I’m just thankful it’s saving me cell phone minutes.”

Scientists are still trying to determine whether the call actually happened.

“We’re confident Sebastian believes calculators are phones, and we’re equally confident Gram Gram sometimes answers the remote control as if it was a phone,” said Morgan Syence, a scientist who feels like he gets the cases nobody else wants to research and therefore intentionally uses the plural pronoun “we” to incorporate his colleagues in his less-than-academic cases. “But we can’t yet confirm whether they can communicate with those devices. It also doesn’t help that the calculator and remote control are both missing.”

Foul play is not suspected in the missing calculator or remote control cases. A frustrated source suggests they are missing more often than not.