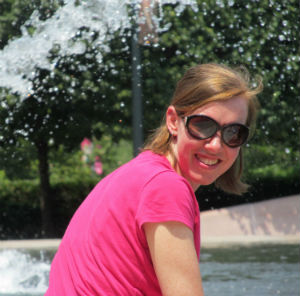 I have long wanted to add author interviews to my website, and I can’t think of a better opportunity to start than now with Kate Hall who helped create the recently released Big Book of Parenting Tweets.

Kate Hall has been named one of the 100 TopTwitter Users in Chicago and is the creator of the blog Hall of Tweets where she interviews Twitter comedians and curates a monthly Top 10 Funniest Tweets list. Kate’s own comic tweets routinely make HuffPost Parent’s Funniest Parenting Tweets of the Week and have been featured on NickMom. When not on Twitter or writing about Twitter, Kate blogs at Can I Get Another Bottle of Whine?, where she writes laugh-out-loud stories about the reality of life. Her essays have also appeared on Scary Mommy, BlogHer, Chicago Parent, TheHuffington Post and in The HerStories Project anthology. Kate lives in Chicago.

First, tell me a little bit about your family and how you are still able to squeeze in the time to write.

That’s a good question. I have no idea how I squeeze in time to write. I have three kids and I homeschool two of them, one is in kindergarten, so she’s still around most of the day. They were all born with a cleft lip and palate (they were all adopted) and so that requires a little extra work with orthodontia, brushing, eating, speech, surgeries, etc. It’s not a ton of extra work, but it’s little things that take minutes out of the day. I pretty much have zero social life outside of my computer – mostly because we moved an hour away from our previous home less than six months ago and I haven’t made any huge connections yet. That sounds so depressing, but it’s not that bad. My sister is fairly close and there’s still adventure in finding my way around town. But having so few real-life friends means I have more time to write! And tweet!

Has publishing a book always been a goal for you?

It has. And this book came about exactly as I had hoped. I know nothing about publishing a book or finding an agent or any of that. I wrote a post about two years ago saying I wished someone would just find my blog and say, we want to make a book out of your blog and then they’d tell me everything I needed to do. That partially came true with this book. Jessica approached me about putting this book together. The only difference is instead of blog posts, it’s all tweets. Fine by me – required even less work. And if there’s one thing I’m all about, it’s doing less work.

I’m not aware of many books like the Big Book of Parenting Tweets. How did the idea for this book come about and did the vision for the book change much from the original concept?

I know that there are books individuals have of their own tweets, but I’m not familiar with any anthologies of tweets. Jessica Ziegler, from Science of Parenthood, approached me with the idea of an anthology of tweets. We had met at the BlogHer conference in 2013 and then were suite mates at BlogU in June 2014. We were familiar with each other and saw each other’s tweets and Facebook updates. I wrote a tweet that I shared on Facebook and someone said something about putting tweets in fortune cookies. Jessica sent me a DM saying that I could actually do that. She researched custom fortune cookies and gave me the info and everything. But I’m too cheap to front something like that. I’m not a good salesperson at all, so I could just see me with this closet full of fortune cookies containing my tweets that I’d be eating from for the next six years because I couldn’t sell them. But then Jessica came back with another idea after I responded. The idea for the anthology. It took us, along with Norine Dworkin-Mcdaniel (Jessica’s partner at Science of Parenthood), four weeks from the time Jessica came up with the idea to getting the book to the printer. The final product is exactly what Jessica proposed to me initially in that DM.

How difficult was it to choose what tweets would ultimately be in the book when there must be millions of tweets about parenting on Twitter?

There were about 20 people who immediately popped into my head when I read Jessica’s proposal. We wanted people who were consistently hilarious, who were parents and who, obviously, had some good parenting tweets. Then we approached those people, plus some others I researched after the proposal, asked them to send in their 20 best/funniest parenting-focused tweets and we voted on those tweets. We did a blind vote. Jessica, Norine and I voted, as well as Jeff Terry from JeffandJillwentupthehill.com. Jeff helps me pick my top 10 funniest tweets lists every month. He’s really good at it, so I definitely wanted him involved. After we voted, we used the tweets with the highest votes in the book. Jessica illustrated 30 additional tweets.

What’s the next project for Kate Hall?

I’m planning to do a second hilarious tweets book with Jessica and Norine. They have another book based on their blog, Science of Parenthood, that they’re focusing on next, but I’ll be doing some of the legwork on the second book of tweets in the meantime. If people are interested in submitting their funniest tweets for possible inclusion in the next book, they can go to the submission page (http://bigbookoftweets.com/submissions/) on our site and leave their name, email and twitter handle and we’ll let them know when we begin accepting submissions.

Here are some of Kate’s favorite tweets from the book:

My kids love juice boxes, unless someone else puts the straw in. THEN THEY’RE RUINED.

When I realized my new haircut was a “mom” cut, I cried bitter tears of despair onto my Jordache dark-wash elastic waist jeans.

Watched my 4yo make a potato chip sandwich with cookies for the bread, and now he’s my new life coach.

Help, my wife made me push a double stroller into a Gymboree at the mall and I’ve been stuck in here since May.